Besides the large German bore as a basis for our Model 3000, we offer the typically French bore which differs from the former by having an elongated lower joint cone and a so-called poly cylindrical ratio in the upper joint (model 1000 / 1000+).

The combination of optimised tone holes and a traditional French bore allow for a deliberately more homogenous sound throughout the registers and a significantly optimised twelfth ratio. The result is a greatly improved intonation.

All further configuration options, e.g. the choice of wood, are listed in our configurator.

For more information on the manufacturing process of our instruments, please click here.

From A flat to (contra) bass: Clarinets of all tunes and sizes For more detailed information, please click here 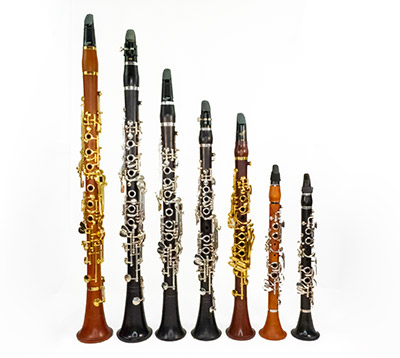 The period clarinet being a largely diatonically constructed instrument, the vast variety of clarinets we know today came to be. On period clarinets, keys with up to about three key signatures could be played quite well. Beyond that, sound, intonation and technical flexibility were limited which made the building of differently tuned instruments necessary.

Over time it showed that even with a chromatic design, the characteristic sound an instrument has due to its size, remains the same.

In musical scores during the 19th and 20th century, a much larger number of tunes was being used than we are able to, today (Clarinets in C and D). We would like to revive this historical playing experience and implement it in our daily work to evolve the richness of tonal colours in today’s music. 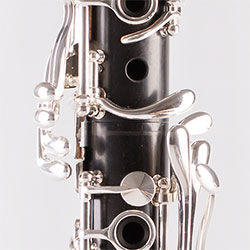 Please, use this tool to select your desired instrument’s features.

From the album Françaix & Prokofiev by Shirley Brill, Track 9
(Clarinet in A made from boxwood).
For further information on this particular recording, please click here.

From the album Françaix & Prokofiev by Shirley Brill, Track 1 (Clarinet made from grenadilla).
For further information on this particular recording, please click here.

From the album CaraClarina by Caroline Hartig, Track 6 (Clarinet made from mopane).
For further information on this particular recording, please click here.

Should you have any further questions or special requests,
please don’t hesitate to contact us.